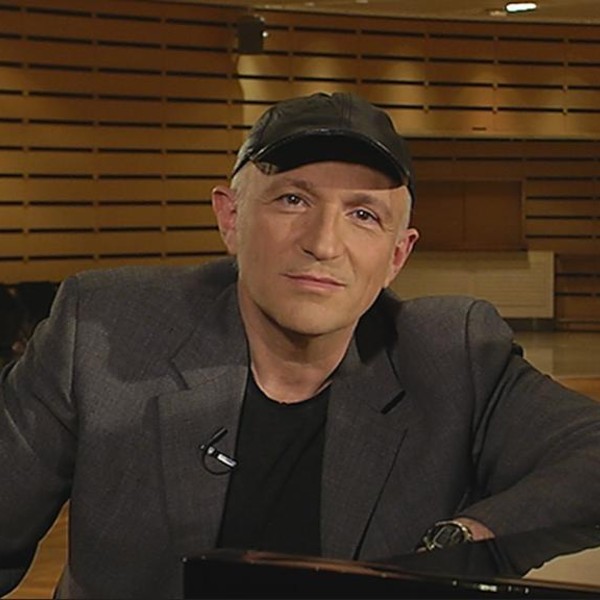 An internationally acclaimed Greek composer, pianist, arranger with great talent. He has collaborated with the largest orchestras in the world and has been honored with significant awards. Restless spirit, without musical prejudices.
Share

Christos Papageorgiou is a composer, concert pianist and also producer of Classical Music Programs for TV ET 1&2 and Radio 3 National Channels. His other activities include conducting, lecturing and teaching.

He has received  awards including the First Prize at the “5th International Competition for Composition “2 Agosto” (Italy) , also top prizes in five International Piano Duo Competitions in U.S.A, Japan, Italy, Czech Republic and Switzerland,  the “Young Artist of the Year” award for 1998 by the “National Society of Critics for music and drama” and as Radio 3 Director the Cultural Award of  the “Foundation for the Building of the “Maria Callas” Lyric Academy”.

His other activities include productions of numerous radios and tv programs, giving solo piano recitals and concerts, lecturing and teaching, also conducting, all with equal critical and public acclaim. He is widely known in his country, as producer of Classical Music Programs for TV and Radio.

Between June 2014-15 he has been the Director of the National Classical Radio 3 (Trito Programma).

Since September 2015 Christos Papageorgiou is the Artistic Director of the National Conservarory Kifissia.

From 2016 to the present is appointed “Program’s Special Cultural Advisor” in ERT where he also broadcasts weekly on National TV and Radio.

In 2015 on a televised anniversary concert performed and conducted from the piano Prokofieff’s 3rd Piano Concerto 85 years after Dimitris Mitropoulos in Berlin thus becoming the fourth after Prokofieff and Van Cliburn to do so.

Some of his various distinctions include: First Prize at the “5th International Competition for Composition “2 Agosto” (Bologna,Italy) for his "Electric Guitar Concerto".

First prizes / distinctions in five International Piano Duo Competitions in U.S.A, Japan, Italy, Czech Republic and Switzerland. He was the recipient of the “Young Artist of the Year” award for 1998 by the “National Society of Critics for music and drama”,

Special award for his cultural work as Radio Director from the “Maria Callas Society for the new Lyric Academy” and as a producer from the “Friends of Classical Music Society”.

Appointed “Artist in Residence” at the Awarded International Classical Music and Opera “Festival of the Aegean” in Syros ,2013.

He has obtained his titles and diplomas in all the fields of his activities (piano, composition, conducting, teaching), with honours and distinctions from the Royal Academy of Music in London (with full scholarship and “Leverhume Trust Fellowship”), University of London, Thames Valley University the Athens State Conservatory. He was also granted the Onassis Foundation scholarship, among many others.

Christos Papageorgiou gives regularly numerous lectures and lecture concerts (many times both as soloist and conductor). He had been teaching  for 10 years Music History and Piano at the Ionian University in Corfu and the National School of Dance, was a regular pre-concert lecturer for the Athens State Orchestra’s annual series and lectured in many Institutions around Greece and abroad such  as the Wiener Gesselschaft fur Music, Lucern Conesrvatory, the Mass Media Department of the Athens University the Postgraduate Department of the School of Architecture of  Volos University e.t.c.

Since 2019 the composer is represented worldwide by MUSICENTRY

“Α Masterpiece, this will stay in history. A great musical work. An achievement of the highest level for any composer or performer. An ambassador of modern music for Greece which should be presented all over the world.”

“…a unified expression of tautly focused energy. It was a great concert opener and marked the work of someone whose career would be interesting to follow.”

“…of the Skalkottas’ monumental set of 36 Greek Dances this one (by Papageorgiou) could be the …37th !..”

”…An amazing composer ….”Pyrrichios” is an absolute winner!”

Stylistic Variations on a theme (Sto perigiali to krifo) by Mikis Theodorakis for piano solo (2009) 70:00

Strings and also arrangements for

"Dragatrakis Variations" for Violin and Piano (2005)

ARRANGEMENTS TRANSCRIPTIONS on other composers

Songs for voice and large orchestra

Love of my Life (Freddy Mercury) for voice guitar and Orchestra

Book Music and Lyrics by C.P.

(Music and 2 songs in lyrics by Argyris Chatzinakis)

Circle of rock songs in lyrics by Argyris Chatzinakis