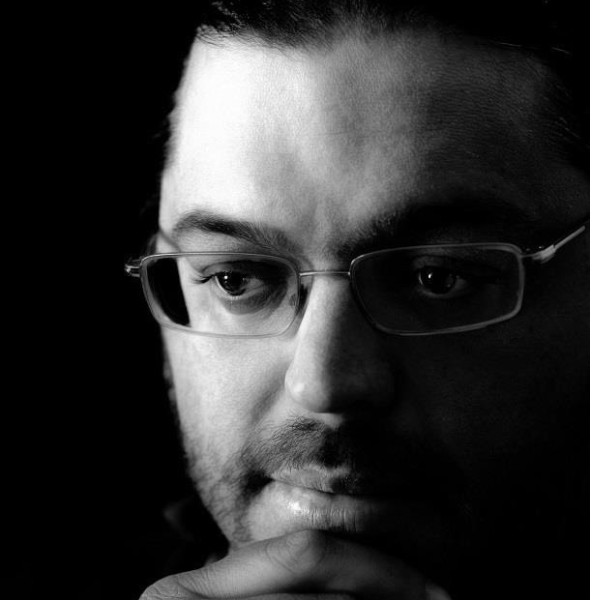 Distinguished composer from Rhodes with multidimensional work and professor of classical guitar. He follows a journey of cultural geography and music diplomacy, representing Greece internationally in concerts, showing in the best way that a Greek with love in Art can become the lighthouse and sea of Culture.
Share

He received his music education in A. Corelli Conservatory (Rhodes), where he is currently the Conservatory’s professor and director. He also works in the synthetic study of the sound phenomenon and the depiction of image in sound.

He is co-founder of the «European Polyphony / Polyphonie Europeenne» festival and founder of Ars Artis Organization.

His first appearance in the record industry was in 2015 in the record «Echomonologues» in collaboration with “Subways Music” Company.

He has created multiform compositions for orchestra, choir, theater, chamber music and pieces of music for solo instruments.

In 2016 he composed the music-theatrical play titled “O kiklos tou 10” [The circle of 10”] which was presented at Michael  Cacoyannis Foundation and has worked with very significant actors, directors and choreographers.

In 2017 he composed the Oratorio “Theophanes  the Greek” founder of the Russian iconography.

It was presented before an audience for the first time at the Cathedral Church of the Annunciation in Rhodes, and then in Istanbul.

Then the play was presented at the Collège Notre Dame de France in Paris (France) and in the State Tretyakov Gallery in Moscow (Russia).

The compositions of Savvas Karantzias have traveled the world and his works were presented by significant Greeks and foreign artists as well as by significant ensembles. In 2018 he started a long-term collaboration with the Moscow Synodal choir for whom he receives every year an order for the composition of new plays destined to be firstly presented before the Russian audience.

In 2020 he composed the Oratorio “Adrei Rublev” which was presented in Moscow (Russia) in Zaryadye Concert Hall.

During the last years he is inspired by the Estonian composer Arvo Part.

Since 2020 Savvas Karantzias is represented by MUSICENTRY and the Dutch Publishing Music House Donemus for the publications of his works.

The Oratorio 'Theofanis the Greek' by the composer Savvas Karantzias, written by the poet Arseni Tarkovsky, is a powerful music embodiment of the passions of Man, as well as of the Faith and Hope, with which humanity has lived for many centuries. Medieval hagiographer, authority of religious painting on frescoes, originating from Byzantium, the Theophanes the Greek, the poet Arseni Tarkovsky, the director Andrei Tarkovsky, who spoke about the great Theophanes in "Andrei Rublyov", the composer Savvas Karantzias, author of the Oratorio, are connected with their selfless devotion, freedom and depth of expression, the biblical power of the works.
Marina Tarkovskaya

The circle of nine

In memory of Giya

I was sleeping under a jasmine tree

Community Hall of the Society

Under the auspices of the Ecumenical Patriarchate of Constantinople

Artistic Contributors: Savvas Karantzias, Synodal Choir of Moscow under the direction of Alexei Puzakov, Panayiotis Gogos and the participation of Voce Anima Ensemble.

Under suspicions of the Patriarchate of Alexandria

Under the auspices of the Russian Ministry of Culture

Cathedral of Christ the Savior

“THE SOUND OF SAINTS”

All pieces are written for solo instruments – guitar, piano, cello, clarinet, flute, except for a flute & cello duet. All six compositions were recorded live: the first in the Amphitheatre of the University of Macedonia in Thessaloniki and the other five at the Grand Master’s Palace in Rhodes. The performers are Panagiotis Gogos (piano), Giorgos Kavasilas (guitar), Angelos Liakakis (cello), Vivi Papaioannou (flute) and Manousos Ploumidis (clarinet).

The musical work” THEOPHANES the GREEK” is an original musical composition from Savvas Karatzias written for a mixed choir and chamber orchestra. A musical pilgrimage that follows and reflects in sounds the life of Russian iconography founder Theophanes who was also the teacher of the most important Russian iconographer (Saint) Andrei Rublev.

CD 1: Theophanes the Greek, an oratorio for reciter, soprano, mixed choir and orchestra (2018)