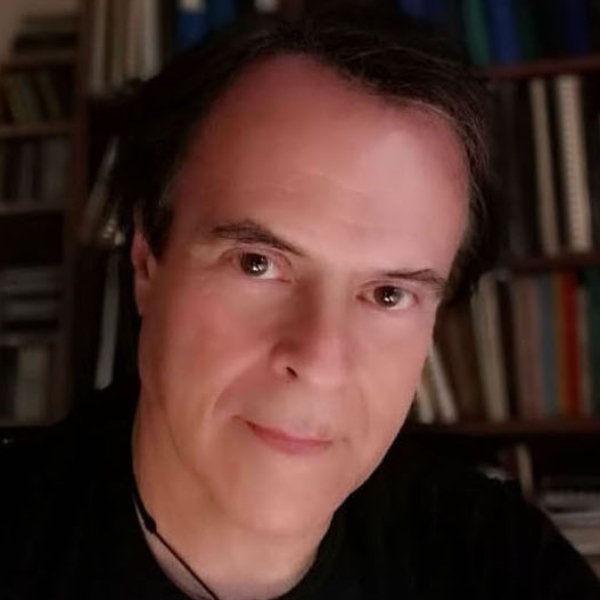 A multi-talented composer whose work covers a wide range of contemporary music such as string quartets, concerts for various instruments and orchestra, works for chamber orchestra and symphonic music, works for voice and solo instruments, choral music, music for theatre, electroacoustic music and works with acoustic instruments. He has been honored with important distinctions in Greece and abroad.
Share

He was born, lives and works in Athens. Initially, he studied Advanced Theory of Music (with Al. Laskaridis, Ath. Papanikolaou and K. Kydoniatis,) and graduated from the Apollonio and Hellenic Conservatories in Athens, receiving degrees in Harmony, Counterpoint, and Fugue with an unanimous grade of Excellent.

At the same time he studied kinesiology and orchestra conducting with Lefteris Xalkiadakis, and also double bass, electric bass and piano.

He completed his studies in Composition, Analysis, Conducting, and Electronic Music at the University of Belgrade (Srdjan Hofman, Zoran Eric), from where he graduated with a Master of Arts (MA 1997).

He attended (1992-93) the series of Music Informatics seminars at the Center for Contemporary Music Research (K.SY.M.E.), in collaboration with the Columbia University Music Research Center on the topic "Music through programming" and various composition and music notation seminars.

A prolific composer whose compositional work covers a wide range of contemporary music and includes -so far- 137 works such as string quartets, concerts for various instruments and orchestra, works for chamber orchestra and symphonic music, works for voice and solo instruments, choral music, music for theater, electro-acoustic music projects and mixed media compositions with acoustic instruments and computer (mixed media composition), as well as sound processing with samplers and other applications (Logic, Ableton, Max, Super Collider, etc.) for stereo and multi-channel systems.

The search and application of new methods and new timbres, the investigation of the physical properties of sound and its transmission through natural media, the different ways of production and its expressive potential, the multidimensional sound organization, the expansion of the organology through the constant review of sound which leads him to revisions of musical language and aesthetic approaches, are the demands of each of his new works.

An important direction of his creative path is also electro-acoustic music and electronic processes in general which are shaped and determined by the use of computers, the exploration of sound, rhythm, resonance, microtonality, and multi-media works.

The in-depth exploration of music and the learning of some programming environments and tools, help him to constantly expand his horizon, to perceive and understand the world of sounds.

His research fields are Psychoacoustics & Computer Music and Music of the Environment, Philosophy, mathematics and physics (whose common element is inspiration) always occupy him in the creative process, open up new horizons and push him to create his own musical world.

His works have been performed by renowned soloists, chamber ensembles and orchestras in Greece and other countries of Europe and the USA, in festivals, concerts and concerts of instrumental and choral music and in live broadcasts of the Third Program of the Hellenic Radio. Many of these are commissions and orders from music organizations and other organizations in Greece and abroad. He has also composed, arranged, orchestrated and conducted works of Jazz music, which have been recorded and performed in concert venues.

In 2016, he began his collaboration with the international record company "Phasma Music". In collaboration with Sarton Records Warsaw Poland, two CDs of contemporary music works, Aleph and Beth, were released in which he participates with two of his works, “Stochasmos” and “Makron” for solo flute.

His other works were also recorded and will be released by the Phasma Music label, such as String Quartet No 2 (2009), Breath and Sound for solo flute (2018), Antinomies for flute and piano (2019), Inner Spirit for flute, violin, viola and cello (2019), ''Monologue'' for solo clarinet (1994) and Elampsi for solo violin (2022). With the same company (''Phasma Music'') new recordings and concerts have been launched, while at the same time a personal CD is being prepared which will be released at the end of 2022.

He has repeatedly given lectures and taught composition seminars on contemporary music creation, where he has presented works by Greek and foreign composers.

In the years 2010 to 2018, he was a member of the Committee of the Ministry of Culture & Sports, for the examination of requests to hold events at the Herodes Atticus Conservatory and other important venues.

Since 1994 he has been a regular member of the Greek Composers Union and since 2018 he is a member (superintendet) of the Board of Directors.

His works are published by Universal Edition Vienna, Austria.

Since September 2022, the composer is represented worldwide by MUSICENTRY.

Initially he studied the music of important contemporary composers with the aim of creating his own musical corridors, ignoring every convention and every limitation, illuminating other points and other angles of the musical "universe", trying to create a personal stylistic language.

In the process of synthesis he uses an algorithmic logic. An evolutionary structure in time that produces values ​​based on specific rules for determining the musical parameters of a compositional process.

His synthetic approach to the organization and development of his musical material is the complex numerical relationships, the use of algorithmic procedures for the development of the harmonic and rhythmic musical material as well as the structural characteristics of a work, the evolution of the elements into individual trends, the tonal development, horizontal and vertical polymetries and polyrhythms, layered rhythmic patterns and harmonic combinations.

The particular tonal development, the constant transformation with constant rearrangements, the creation of new smaller sets of the original musical material, the ever-increasing complexity, the microtonality, the structure of the dynamics, the musical gestures (articulation), the timbre structure, the investigation of sound and the way it will be produced by each instrument, the use of randomness models with some controlled parameters (in some of his works), the interterminate notation and the continuous configuration of the musical material, are characteristic elements of his work.

Each of his works has its own form and its architectural design differs from all others. It starts from a small element which constantly evolves with unlimited development possibilities. What is important to him is the constant movement and the uninterrupted flow of the structure. Its linear progression coexists with its harmonic tactics. At the same time there is dissimilarity, contrast, color and complexity.

An important direction of his creative path is also electro-acoustic music and electronic processes in general which are shaped and determined by the use of computers, the exploration of sound, rhythm, resonance, microtonality, and multimedia works (multi-media ).

The in-depth exploration of music and the learning of some programming environments and tools, help him to constantly expand his horizon, to perceive and understand the world of sounds.

His research fields are Psychoacoustics & Computer Music and Music of the Environment.

Philosophy, mathematics and physics (whose common element is inspiration) always occupy him in the creative process, open up new horizons and push him to create his own musical world.

Echomorphes, for Flute and Vibraphone (2017)

Work based on the Fibonacci sequence. Use of proportions in the structure, rhythmic, metrical and phthonic organization of the work.

The post-series orientation, the material drawn from pitch class sets based on the Fibonacci sequence, the free use of intervals mainly of the semitone, the constant change of use of bows, pizzicatti, tremolos , and the extensive use of harmonics, aim to create a constantly changing development and tonal change.

The successive transformations, the default circular spatial permutation, (rotation), the constant rearrangements of the motivic tonal classes, the use of mirror parts, the rules and the derivation of new subsets, constantly create new geometric displacements and symmetries.

The complexity, the compositional relationships of the sound intensities, the complex rhythmic variations, and the continuous metrical transformations, create changes of the rhythmic and tonic-melodic shapes and a condensation of the harmonic and counterpoint sound material, are the structural elements of the work and create another dimension in the structure and aesthetics of the work.

String Quartet No. 2 is a work of exceptional difficulty, and demands particularly high skils by the performers.

"Birth, culmination, depletion of energy and decomposition of elements (classic case of entropy)...freezing in time..."

The musical material of the work is cells of three and four chords which are expanded with continuous rearrangements, combined with modal elements.

The organization of the rhythmic parameter, the tonal development, the elements of (expanded) repetition and the constantly increasing complexity, describe the interaction of the sound parameters, which shape the form of the work.

A work with a strong rhythmic character, complex rhythmic treatment, development and metric changes, it seeks a specific result while also demonstrating the increased skill requirements of the score.

Shine. Psychic radiance and illumination by God power. As the light of knowledge, the radiance belongs to the tradition of Western light imagery, where the knowledge of truth is associated with a shining clear light. The epistemology of St. Augustine identifies the understanding of divine truth with radiance, the influx of light.

The organization of the sound material is done by groups (group composition) and sets of tonal classes (pitch class sets) in a combinatory way and with the possibility of mutation in any order, the ways of processing the voices of each group, the rearrangement of the tonal material, the circular isometrics transformations, the tonal displacement of the original sets of tonal classes, complementarity and combinability, result in the formulation of relationships and properties, which determine the rhythmic and temporal organization of the work.

The constant changes of the way the bow is used, the extensive use of harmonics, the frequent change of dynamics and the use of specific types of spatial content, create interactive processes, which dynamically affect the sound material and the form of the work.

One type of space content is mainly used, the minor 2nd and its inversions.

The repetition of melodic intervals and the continuous use of the semitone create a condensation of the dissonant sound material and are rendered with a special character taking into account the limitations of the instrument, with the aim of sound enrichment and together with the other techniques create a plan of continuous melodic-rhythmic variation.